Activity & Entertainment
By Maria Wilcox •  Updated: 07/29/22 •  13 min read
Hey Mamas and Papas! This site is reader-supported and we earn commissions if you purchase products from retailers after clicking on a link from our site.

If you want to get a gift for your toddler that is fun, rewarding, and requires a bit of hand-eye coordination, then a nerf gun might be something you want to look into. Despite its intimidating sound, a nerf gun for 3-year-old can be a good idea if you know how to select one that is safe and easily functional.

There are several aspects of purchasing a nerf gun for a toddler that you’ll want to be aware of before making your purchase. In this post, we intend to review those aspects with you, as well as provide you with options for safe and functional nerf guns that your toddler will love.

Product prices and availability are accurate as of the date/time indicated and are subject to change. Any price and availability information displayed on [relevant Amazon Site(s), as applicable] at the time of purchase will apply to the purchase of this product.

Prices pulled from the Amazon Product Advertising API on:

What Nerf Gun Is Good For 3 Year Old?

First, a note about Nerf.

The “nerf” guns mentioned in this post won’t be by the Nerf brand. Many actual Nerf guns are marketed toward children ages 8 and up. We have done the research to ensure that the general “nerf” guns mentioned here are safe for toddler children. Still, we will refer to these off-brand blasters as “nerf guns” for the sake of simplicity throughout this post.

The best “nerf” gun for a three-year-old is one that is easy to handle, shoots with accuracy, is safe, and whose foam darts can be propelled a decent distance.

Nerf guns for children that are hard to handle may prove difficult and frustrating for your toddler. When considering whether or not a nerf you’ve selected will be easy to function, check the details concerning the nerf gun. Is it lightweight? Does it involve reloading?

A heavy nerf gun that involves clips and complicated reloads is not a good idea for your toddler. Instead, you’ll want to select a nerf gun that shoots a single shot at a time and can be easily reloaded by your child without much effort.

Unfortunately, some nerf guns have little to no accuracy, which can make them unexciting, to say the least. This can lead to frustration and an unwillingness to play with the toy if the nerf gun isn’t functioning the way it should. Thus, accuracy is something you’ll want to pay attention to when selecting a nerf gun for your three-year-old.

Most nerf guns are quite safe for children, but some pack more force than others. To be safe, choose a nerf gun that is designed with little ones in mind as these aren’t likely to cause any injuries or pain to those who get hit with their darts. Moreover, you may consider investing in eyewear (some nerf guns already come with these) to protect the eyes of your toddler and those caught in your toddler’s crosshairs.

Another defining factor for whether or not a nerf gun is a good pick for your toddler is the amount of distance the foam bullet can be propelled. Similar to issues with accuracy, a foam bullet that does not travel far is unlikely to hit the intended target and thus, won’t be much fun to play with.

Albeit, your toddler won’t need his or her nerf bullet to travel miles, however, it can be satisfying to see the dart fly a decent distance. Thus, this is yet another factor to consider when purchasing a nerf gun for your three-year-old. 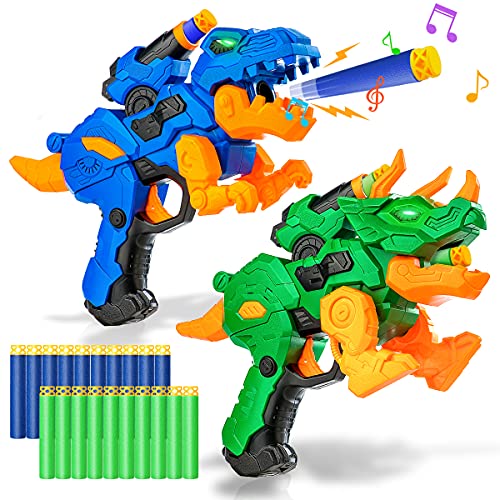 Parents have nothing but positive things to say about the Banvih Store Electronic Dinosaur Blaster. These nerf guns are great because they not only shoot darts with great accuracy, but they also come with lights and sounds. Your child will likely love the sound of the dinosaur when they are shooting their darts and will love the LED lights that flash as they are handling the nerf.

Not only that, but parents attest that the foam bullets don’t actually hurt when they hit someone and they can be easy to reload. Parents also swoon at the fact that these dinos can be played with even without bullets, as the mouth, tail, and arms are moveable making it a great toy to play with at any time of the day! 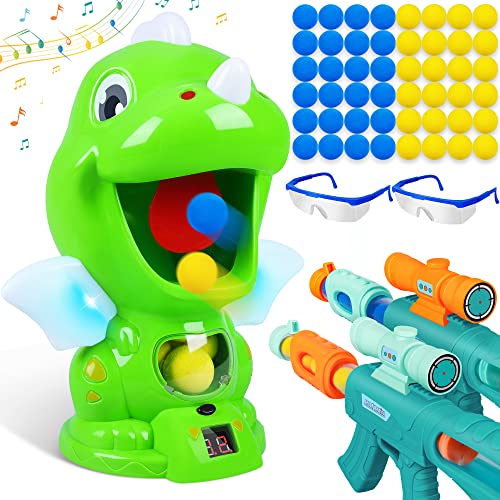 Another awesome buy for a toddler, the CUKU Store Dinosaur Shooting Gun is perfect for little ones that like to get competitive. The foam balls that encompass the gun are made from safe, non-toxic, and recyclable foam balls that don’t hurt when shot at an intended target. Children are to aim the nerf gun and foam balls at the dinosaur that comes with it. Sound effects are made when the target is hit. There is an LED scorekeeper on the dinosaur for those who love to keep score. All in all, this would make a great gift for a toddler. 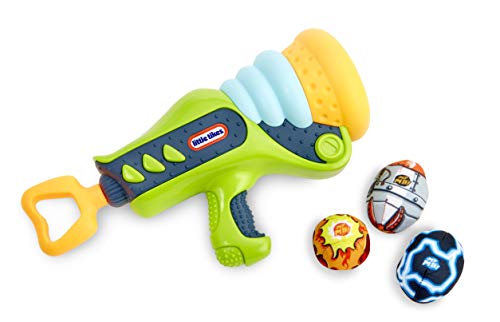 Little Tikes is a well-known brand with a reputation for high-quality children’s toys, and this nerf toy for toddlers is no different. The Little Tike Mighty Blaster features a pull-back mechanism that is easy for even the youngest children to master. It can be easily loaded, aimed, and fired at the intended target. The foam pod darts are colorful and soft so they won’t hurt anyone in the way. The blaster is said to come with a monster target to help with aiming practice. You can’t go wrong with this pick! 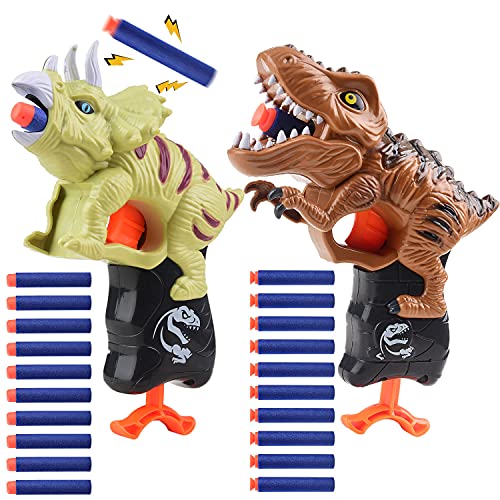 Happitry Dinosaur Blaster Gun is an excellent buy if you are looking for a foam bullet that can go the distance but is still easy enough for your three-year-old to operate. While it doesn’t have the LED lights and sound effects that other dinosaur blasters do, this nerf makes up for the lack of accuracy and distance. Shooting these foam darts is exciting because they can be propelled a good distance which will prove exciting for your three-year-old. Still, the darts that come with this nerf are soft enough not to injure anyone. This dinosaur blaster is also very easy to operate and comes with two in a pack making engaging in nerf battle that much easier! 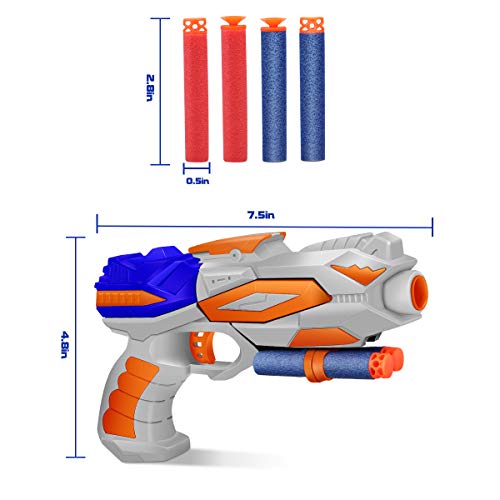 Last but not least, the Duckura Blaster Guns lack the frills and thrills of other models but make up for the lack with a more realistic closer to “real” Nerf look. And though these blasters look mature, most parents agree that younger children can easily handle them. They come with two blasters in a pack and come with 40 darts for each blaster for a total of 80. These blasters are long-range, so they can go the distance. Many parents say that these are very comparable to real branded Nerf guns. Though they don’t hurt when striking someone, you should still be careful to have your child avoid shooting these near the eyes.

One notable downside you should be aware of with these blasters is that they require ”cocking”, unlike the other blasters mentioned. Parents seem to agree that children that are closer to age 4 may be able to cock these better than children younger than three. Keep this in mind when considering this model.

In general, it can be safe for a three-year-old to have a nerf gun, but you need to know how to select one.

Choose one that is specifically marketed for children aged three (such as the blasters mentioned in this post). Also, consider the power behind the darts and their ability to be easily launched and reloaded.

We’ve taken care to ensure the picks listed here are safe for your little one, but always do additional research when needed, and be sure to provide your little one with protective eyewear, especially if older siblings in the house have more powerful nerf guns. Some nerf guns are known to cause damage to the eye when fired at close range. 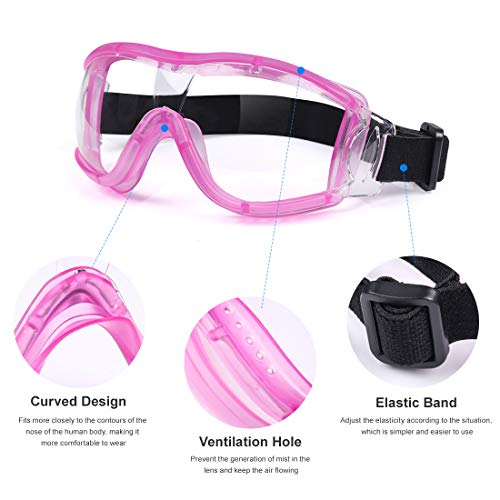 All in all, you’ve got options when it comes to selecting a nerf gun for your three-year-old. Since most actual Nerf guns are marketed for older children, some of the off-brand versions are better picks as they are designed for younger hands with much simpler mechanisms and are guaranteed to be safe.

If you want more calm entertainment for your toddler, try out post on best videos for toddlers or circle time for toddlers.

We hope this helps you select a fun and safe blaster for your little one…See you next time!

Product prices and availability are accurate as of the date/time indicated and are subject to change. Any price and availability information displayed on [relevant Amazon Site(s), as applicable] at the time of purchase will apply to the purchase of this product.

Prices pulled from the Amazon Product Advertising API on:

A 2-year-old could use a nerf gun that is easy to load and shoot. Some of the pull-back types of nerf guns may be better suited (such as Little Tikes) but even these may require some arm strength. At worst, you may need to blast the nerf gun for your two-year-old until he or she reaches the age of three. At that point, he or she may have the strength needed to blast the nerf gun on his or her own.

What age is appropriate for NERF guns?

There is no one set nerf guns age. However, we recommend that you always go by the manufacturer’s recommendations when deciding what age is appropriate to purchase your son or daughter a nerf gun. There are options for ages 3 and up, so we suggest you start with those recommended guidelines.

Yes, there are certainly nerf gun options available for 4-year-olds.

Nerf guns are okay for 5-year-olds, just be sure to check manufacturer recommendations.

Most 6-year-olds have the arm strength and coordination to handle Nerf guns quite well. Still, the average true Nerf gun typically has an age recommendation of 8 and up, so be careful when selecting which nerf gun is right for your six-year-old.

Former instructor with an M.A. in Education turned grateful stay-at-home mama to one, I look to share helpful insights related to babies, toddlers, kids, and families for the benefit of real people just like you.